Julia Kociuban - A Series of Concerts in USA 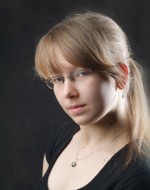 The 17-year old winner of the 2008 Polish National Chopin Piano Competition, Julia Kociuban, was born in Krakow, Poland. Ms. Kociuban is a student of the Mieczysław Karłowicz State Music School in Krakow where she has studied with Olga Lazarska (1998 – 2006) and Prof. Piotr Paleczny since 2006.

She is a recipient of several scholarships including one from the Mr. and Mrs. Kwaśniewski Foundation (Former President of Poland), the City of Krakow Scholarship, Creative Scholarship of the City of Krakow, Małopolska Foundation “Sapere Auso” and from Poland’s Ministry of Culture. She has also been a beneficiary of the Polish Children’s Fund in Warsaw since year 2000.

In July 2003 she took part in the international program Morningside Music Bridge in Calgary, Canada. Since 2004, she has participated in Master Classes presented during the Int’l Chopin Festival in Duszniki, Poland,  and lead by pianists and piano teachers of international acclaim. In 2007 she was a chosen participant of Holland Music Sessions in Bergen.

Julia was invited to play in many festivals, such as the International Festival for Young Talents in Kaunas, Lithuania, David Oistrach Festival in Parnu, Estonia, “Chopin Days” in Warsaw, Young Artists Festival in Krakow, Konzertzyklus in Vienna, Third International Piano Festival in Warsaw and in “Altenburger Musikfestival” in Germany.

Julia also enjoys playing chamber music. She has performed several concerts with her brothers as a “Family Trio” in Krakow Philharmonic Hall, Royal Castle in Warsaw and in Altenburg, Germany.